The wrath of bald-faced hornets is something to be reckoned with. While these insects do help out with things like controlling local yellow jacket populations, their protective nature can transform them into a backyard danger. Bald-faced hornets are fiercely protective of their nests, and just walking too close can provoke them to attack in full force.

To help keep yourself safe from these stinging insects, make sure you know these basics about their behavior and what to watch out for.

You can distinguish a bald-faced hornet from many other stinging insects because of their black and white markings, as opposed to black and yellow. These markings are highly visible on the face and the tip of their abdomen (in other words, on their rear end by their stinger). Bald-faced hornets have two relatively thick body sections, and their front wings fold lengthwise along their body when at rest. These insects grow from about ½ to ⅝ of an inch in length. A queen can reach around ¾ of an inch long. 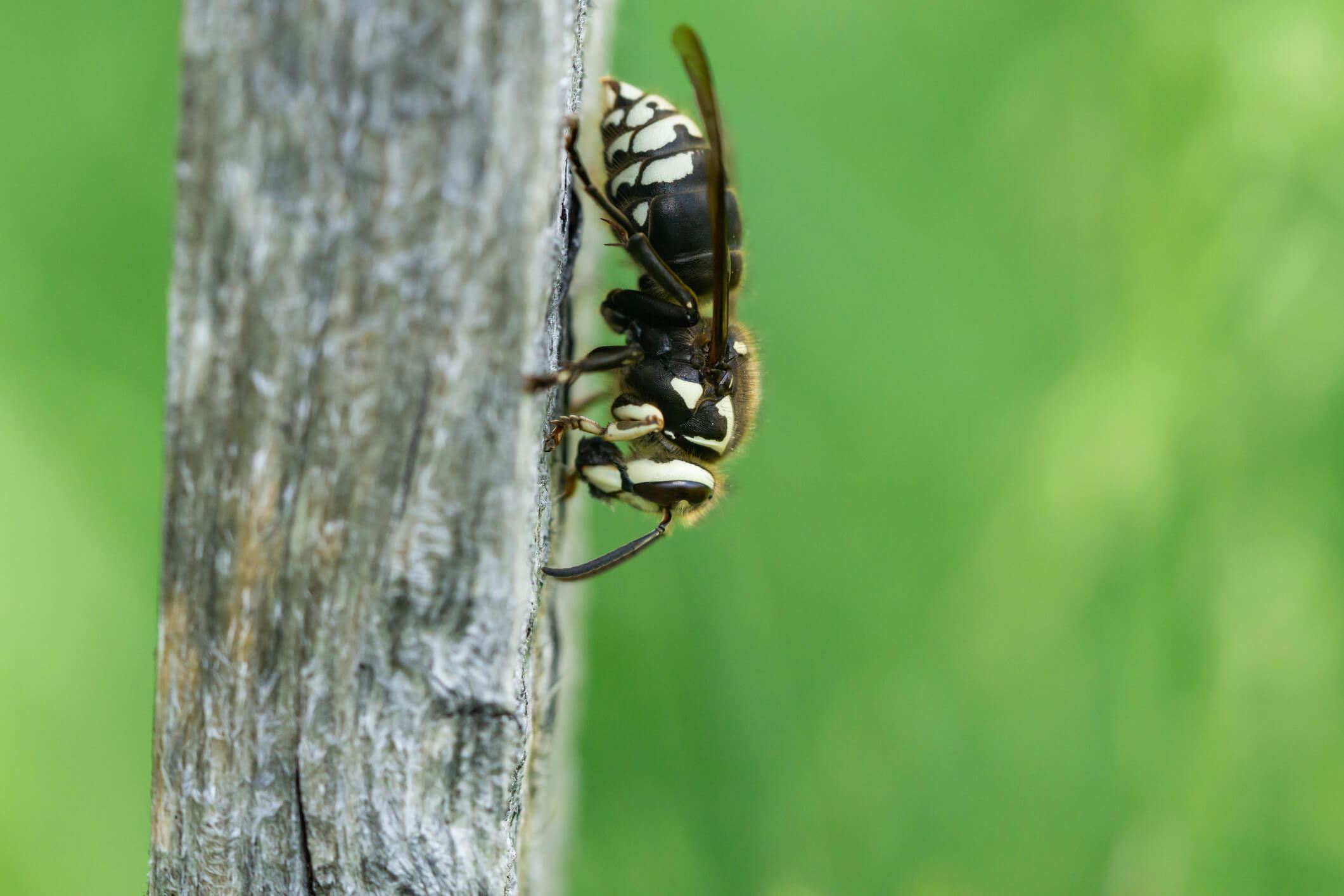 Where do bald-faced hornets live?

Bald-faced hornets are native to North America. You're most likely to find them in the southeastern United States. They construct large, round, "paper" nests during spring, where they raise their young. You can find the nests in various locations, including shrubs, bushes, trees, on houses' overhangs, in sheds, or even on utility poles.

A queen creates a "starter" nest by chewing up old or rotting wood and combining it with her saliva to make a paper-like material. Her first brood builds out the rest of the nest as she continues to lay more eggs. By the time a nest is complete, it can reach up to 2 feet high and 18 inches across. Many nests will be about the size of a football or basketball. Colonies generally range in size from about 100 to 700 workers.

When are bald-faced hornets most active?

Bald-faced hornets are most active during the day. This is when they spend their time building their nest, caring for their young, and looking for food to eat or bring back to the larvae they're raising. At night, bald-faced hornets take shelter inside their nest.

For this reason, pros at Pest World explain that if you need to get rid of a nest, a pest control expert will typically examine the nest during the day then take the stealthy approach by removing the nest at night. This method decreases the risk of getting stung and also increases the number of pests you can remove.

What attracts bald-faced hornets and what do they eat?

Bald-faced hornets are mostly attracted to whatever they like to eat. According to The NatureMapping Foundation, these insects’ diet consists largely of soft-bodied insects (such as aphids and caterpillars), the pollen and nectar in flowers, and meats.

Yes; bald-faced hornets will act aggressively to protect their nest against any perceived threat, human or animal. They are sensitive to anything that enters what they consider to be their territory. They are also easily upset by loud noises, such as lawnmowers and leaf blowers. Even if you walk within a few feet of the nest by accident, these insects may swarm you in a concentrated attack, and if you run, they will chase you.

Because their stingers are smooth, each bald-faced hornet will be able to sting you multiple times without causing harm to itself. These insects also come equipped with a truly unique weapon: a poisonous spray that they squirt at their victims' faces, particularly the eyes. If they happen to make a direct hit, your eyes will sting and water, and you will suffer temporary blindness.

When a bald-faced hornet stings you, it injects venom under your skin. The site of the sting will swell, hurt, and itch for approximately 24 hours. However, if you are allergic to the venom, your body’s reaction will be more severe. If you or anyone who has been stung shows one or more of the following symptoms, seek medical attention immediately:

Bottom line: you can put yourself or others around you at risk by going near a bald-faced hornet nest. A lot can go wrong if you try to deal with the nest yourself. If you see these insects flying around your property, steer clear, and call a professional.

Do you need a nest removed?

At Sage Pest Control, our pest control specialists are fully screened, trained, and equipped to provide the most effective solutions for stinging insects. Additionally, we are among the less than 3% of pest control companies in the country to be QualityPro certified. Give us a call at (704) 445-5305 or request a free quote through our online contact form for bald-faced hornet removal service.