If you have a fear of spiders, you’ll be happy to learn that most of the ones you find around the house are harmless to humans. In fact, having some spiders on your property can be beneficial, as they offer some “natural pest control” against mosquitoes, flies, cockroaches, and clothes-eating moths. However, these two North Carolina spiders can harm you if they bite you: the southern black widow and the brown recluse.

Below, we’ll help you identify these two house spiders and provide you with some basic information about their behavior and bites.

Southern black widows are very easy to recognize if you get close enough (although we never recommend getting too close). These arachnids are black and have a red marking in the shape of an hourglass on the underside of their abdomens. You’ll most likely find them in out-of-the-way areas, like sheds, garages, dark corners of a closet, or high shelves you don’t access often.

Black widows (like other spiders) do not go around looking for a person to bite. They prefer to keep hidden away and, overall, are far less deadly than the Marvel character. In fact, the males rarely bite at all, and the females typically only bite if they feel threatened, especially after laying eggs. That being said, if you do get bitten by a black widow, don’t wait to get the bite seen by a doctor because your symptoms could vary from mild to severe.

Black widow venom affects the nervous system. While some people don’t have noticeable pain right away, others immediately feel intense pain and burning where they’ve been bitten. The site can become red and swollen, and two fang marks may be visible.

Your symptoms may include:

Children should be taken to the emergency room right away, as the venom could be fatal. 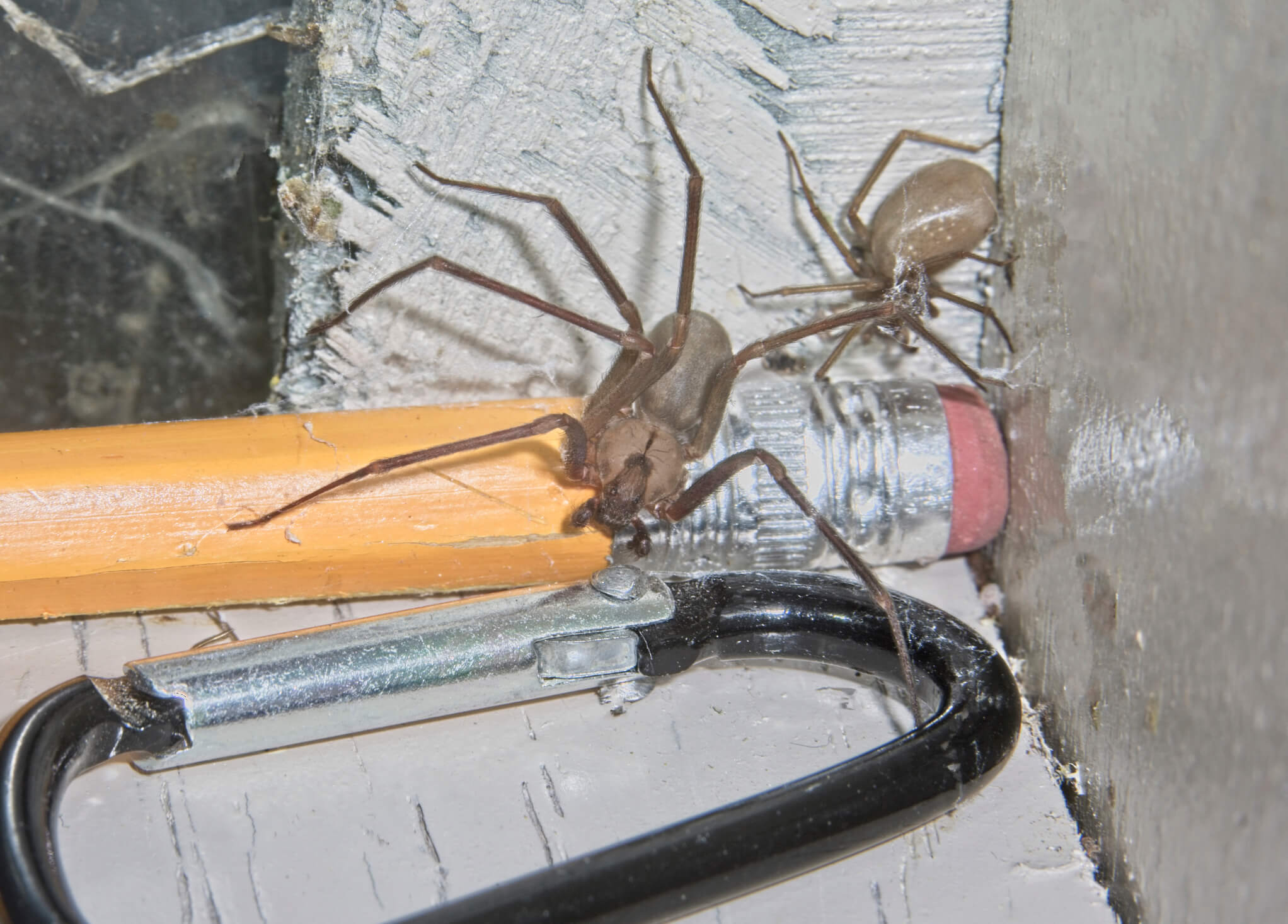 Brown recluse spiders are typically found in the Southeast and Midwest of the United States. They are usually light to medium brown but can also look darker or grayish. Like a black widow, a brown recluse also has a distinct marking that helps you identify it: a dark violin shape on the front half of its body with the “violin neck” pointing toward the spider’s abdomen. This mark is why they’re commonly known as “brown fiddlers” or “fiddleback spiders.”

These spiders are relatively small, usually between the size of a penny and a quarter. As their name implies, they avoid the company of other creatures (especially humans). They’ll spin loose, “messy-looking” webs in discarded boxes, old tires, sheds, unused clothes and linens, underneath furniture, and other areas where they won’t be disturbed. Just like black widows, they only bite when they feel threatened and would much rather remain recluses.

Brown recluse bites are seldom fatal, but because of the venom’s nature, it’s crucial to get the wound inspected by a doctor, especially because some people experience more intense symptoms than others. Initially, you may not even realize you’ve been bitten and only experience mild pain or redness at the site. After several hours or a day has passed, you may have more severe symptoms, such as:

Brown recluse venom destroys blood vessels, tissue, and nerves. If skin tissue doesn’t have blood vessels to deliver oxygen to it, it will die. This can cause a necrotic lesion to form where the spider bit you. It can look like a patch of skin that’s bluish in color or dry and sinking, or it might look more like a blister.

Have the spiders in your home gotten out of control?

At Sage Pest Control, we only use environmentally friendly pest control products registered with the Environmental Protection Agency (EPA). Give us a call today at (704) 413-3398 to request a free quote by phone and schedule spider control service at your home.